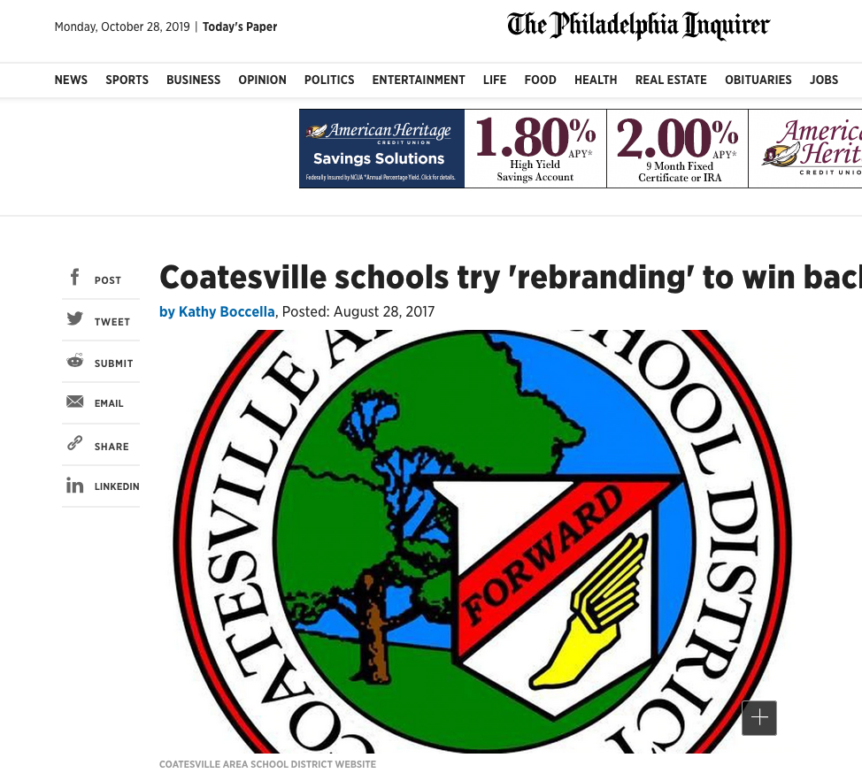 The last few years haven’t done wonders for the reputation of the Coatesville Area School District, where headlines over school fights went viral on social media, the former superintendent and athletic director were caught sending racist and sexist texts, and about 100 teachers have left.

With hundreds of students abandoning the Chester County district for nearby charter schools, officials have turned to a strategy that’s more typically associated with McDonald’s or Oldsmobile.The Coatesville Area School District is in the midst of a rebranding.

Supporters of the campaign – which includes focus groups, newsletters, and the hiring of a communications firm that will be paid at least $55,000 – say the district’s image has suffered because it’s done a poor job of communicating good things about the schools.

But critics say the 6,000-student district should work harder on making tangible improvements in the schools and do a better job of enlisting community groups before it spends tens of thousands of dollars on slick mailers or a bright new logo.

“Shouldn’t we be talking to people and making the problems better?” asked Amelia Mills, a former librarian and Coatesville School Board candidate who participated in a focus group.

Coatesville School board president Dean Snyder said that’s exactly what the rebranding is about. “We’re doing a lot of good things in the district, and we want to make sure we’re getting the message out there,” he said, citing the district’s new teacher training, free SAT tests, and high Advanced Placement test scores, among other initiatives.
The image-building push in Coatesville comes as many Philadelphia-area school districts have added public relations staff or consultants and boosted their online presence or direct-mail marketing to residents to combat charter-school competition and communicate with taxpayers. Coatesville already works with a public relations consultant; the new firm, Communications Solutions Group of Jenkintown, was hired specifically for the rebranding, at a cost of $3,650 a month from last April through June 2018, said company president, Leza Raffel.

But the notion of a school-district “brand” is especially fraught in Coatesville, an economically stressed working-class town that has seen about 800 kids leave for charters in the last three years. In the 2015-2016 school year, it spent about 17 percent of its $151 million budget − a greater share than any other local districts except Chester-Upland and Philadelphia – on reimbursing those charters.

The rebranding effort launched this spring with five focus groups that found that people were unaware of the district’s recent accomplishments and had based their perceptions of Coatesville on what they saw in the news, said Raffel.

In June, the district sent out a glossy mailer, called the CASD Achiever, that spotlighted the opening of an early literacy center, new trends in curriculum development, and its dual enrollment program with Lincoln University. In the coming months, Raffel said, she plans more newsletters, an annual report, and a push to win back charter students by touting success stories of pupils who have returned to the district. She will also look into designing a new slogan and logo – although she’s been instructed not to mess with the popular sports mascot, the Red Raiders.

The push is similar to work that Raffel’s firm has done in other districts such as Upper Moreland, where she created a new bear mascot.

But some local leaders and activists say Coatesville – which added security guards at the high school last year after complaints about frequent fighting – isn’t quite like other suburban school districts.

Any marketing campaign is going to have to win back such parents as Jeanine Nau of East Fallowfield Township, whose two young children attend Avon Grove Charter School because, she said, she was fearful of sending them to Coatesville after seeing videos of in-school fights.

“You just heard the nightmare stories, and it just scared me,” said the mother of a second and third grader.

Coatesville City Council member Carmen Green said the district’s problem isn’t a lack of slick communication but a lack of fundamental listening, and a failure to seek what she called “community buy-in” to what the district is doing. “They refuse to have conversations,” she said.

Longtime community activist Alphonso “Fonz” Newsuan, a harsh critic of Superintendent Cathy Taschner, said: “You can’t rebrand failure. What you have to do is bring about a change that says we are new and improved.”

Meanwhile, those positive vibes from the June newsletter may have been undercut by a recent mailing from the district called “Negotiation Update,” which sharply criticized the teachers’ union and its bargaining stance in contract talks that remain deadlocked as the new school year approaches.

“I don’t think that is going to help them rebrand,” said Audra Ritter, president of the Coatesville Area Teachers’ Association.

Mills noted that focus group members praised Coatesville schools for diversity and sports programs. One recent attendee, Carla Kime, showed up with exactly the type of story the district is seeking to promote. Her daughter, now a senior, transferred back to Coatesville Area High School in ninth grade from Collegium Charter School in Exton.

Kime said her daughter “wanted the activities and breadth of clubs and things offered at Coatesville” and has loved her experience at the school, including the chance to take AP and honors courses.

“Like any district, we have our problems and issues − those are the things that get magnified,” Kime said. “There’s so much good in the district that I think it’s really important for people to hear that,