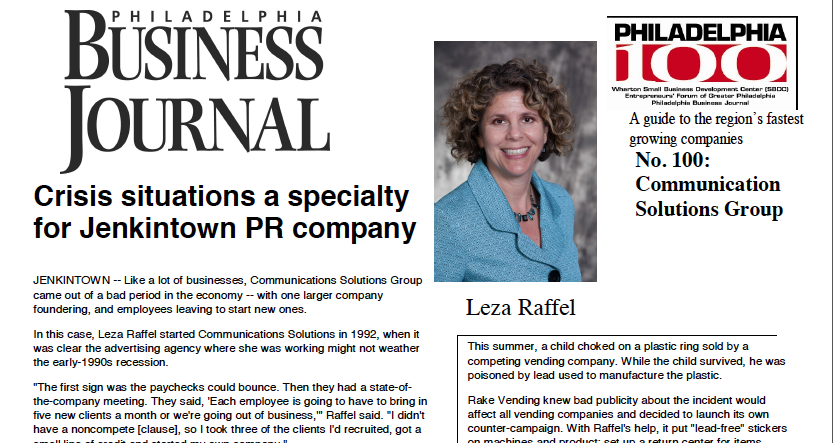 JENKINTOWN — Like a lot of businesses, Communications Solutions Group
came out of a bad period in the economy — with one larger company
foundering, and employees leaving to start new ones.

In this case, Leza Raffel started Communications Solutions in 1992, when it
was clear the advertising agency where she was working might not weather
the early-1990s recession.

“The first sign was the paychecks could bounce. Then they had a state-ofthe-
company meeting. They said, ‘Each employee is going to have to bring in
five new clients a month or we’re going out of business,'” Raffel said. “I didn’t
have a noncompete [clause], so I took three of the clients I’d recruited, got a
small line of credit and started my own company.”

“But [the company] just started to grow,” she said.
Indeed. Today, Communications Solutions ranks No. 100 on the Philadelphia
Business Journal’s list of the fastest-growing companies.

Raffel’s early-1990s baptism into the advertising-public relations world may
have been an unwitting lesson in crisis management, which has become one
of her firm’s specialties.

About 30 school districts in Pennsylvania outsource their public information to
Communications Solutions.

The intent is to promote the positive events going on in the schools.
But often the only time Raffel hears from a client is when a crisis hits —
teacher strike, bomb scare, suicide.

“Some school districts only call when something bad happens,” she said. “I
tell them, ‘We do good news, too.'”

In coping with crisis, Raffel and her staff provide clients guidance, either in
how to handle concerned parents, the media and the public directly or
through them.

“My preference is to have the school district leaders do the talking — it always
sounds better coming from them directly. But we go over the message and
how to word it,” Raffel said.

Occasionally, a school administrator needs to be coaxed into meeting the
outside world head on.

“Some think if they don’t make a [call-back to a reporter], the story will go
away,” Raffel said. “I do workshops on this. I had [a school administrator] call
me once and say, ‘The reporters are on the way. We’ve locked the door.'”
In a case this summer, one of Communication Solution’s business clients,
Huntingdon Valley-based Rake Vending Co., did precisely as Raffel would
have coached: It decided to tackle a problem head on.

Rake Vending operates vending machines that shoppers might see outside a
supermarket — the ones that offer plastic rings and the like for a quarter.

This summer, a child choked on a plastic ring sold by a
competing vending company. While the child survived, he was
poisoned by lead used to manufacture the plastic.

Rake Vending knew bad publicity about the incident would
affect all vending companies and decided to launch its own
counter-campaign. With Raffel’s help, it put “lead-free” stickers
on machines and product; set up a return center for items
already purchased; posted lists of plastic jewelry to avoid.
“That put them in a positive light,” Raffel said.

Still, one of the hardest things a public relations firm has to do
is turn away work.

Like when a British computer programmer claimed he had a
solution to end childhood illiteracy. All kids had to do was
spend 20 minutes looking at a TV screen featuring an image of
a ball bouncing down a road.

“They hadn’t done any studies or any proof it worked — at all,”
Raffel said.

Another case was more difficult, in this instance when a client
also became a service provider. What started as PR work for a
fertility clinic, turned into a situation where Raffel and her
husband had hoped to have a baby, and worked with the clinic.
In the end, Raffel and her husband decided to adopt, ending
the personal business relationship. The fertility clinic was not
happy with the decision and made it clear. Raffel had to make
the decision to walk away a second time.

“I couldn’t, in a clear conscience, work with them,” she said.
But crisis management is just that.

The bad news, she said, has included, “listeria outbreaks,
company reorganizations, strikes, condemnations, accidental
deaths and just about every other awful thing that could
happen during a work day.”

“Lucky for my company,” Raffel continued, “we are our best
when others are at their worst. Our PR staff is comprised of
former reporters, political consultants and even a former
lawyer who have a knack for helping organizations strategize
and communicate even the most difficult message.”